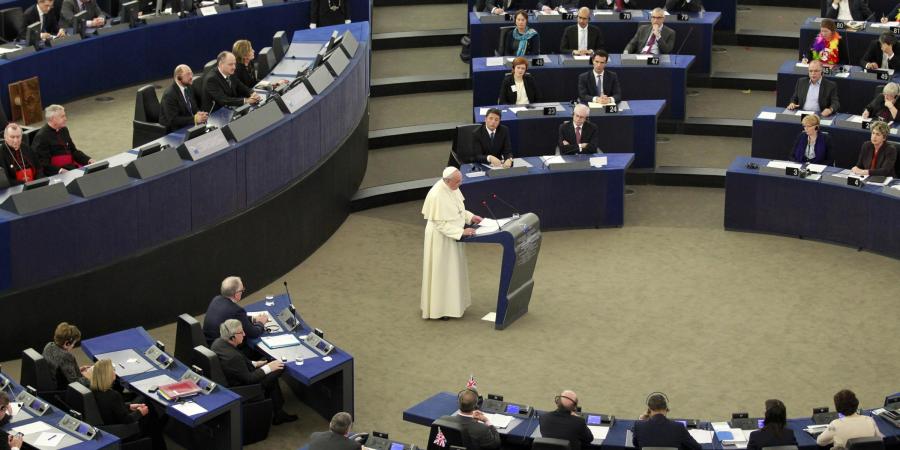 “Europe is the only continent that can bring some sort of unity to the world,” Pope Francis said in a March 2 meeting with a small group of Christian socialists from France.

In a wide-ranging discussion of Christian involvement in politics, the Pope said that Europe has “a universal role” to serve the cause of world unity. To serve that cause, however, the Pope went on to say that Europe must “rediscover its cultural roots.” He added that Europe’s future is endangered by its falling birth rates.

The Pope remarked that today there is talk of an “Arab invasion” of Europe, because of the influx of migrants. But he argued that nationalists are wrong to take an anti-immigrant stand. The problem, he suggested, is the absence of a unifying spirit in Europe– an absence that creates a vacuum that is now being filled by immigration. Throughout history, the Pope argued, a stronger Europe has absorbed contacts with new groups, and found ways to use them as ways to open exchanges between cultures.

Speaking to his visitors about the political situation in France, the Pope said that the country’s emphasis on secularism is “incomplete.” He argued that France needs a “healthy secularism,” one that does not seek to exclude spiritual and religious dimension. As I write, in 8 hours time, a millennium of history is about to be reversed.

For the first time since the Great Schism in 1054, the Pope is about to meet with the Russian Orthodox Patriarch. (Click here to see the latest)

I’m glad you asked, because we are now witnessing the beginning of an incredible fulfilment of prophecy – something that everyone should know about.

To understand why it is so important, we need to go back to Nebuchadnezzar image in Daniel chapter 2. 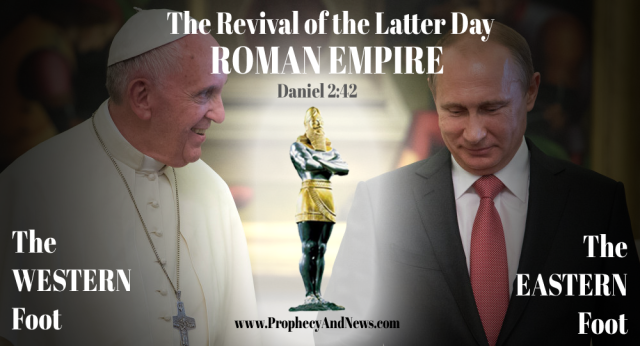 The image of Daniel 2 (seen in the centre of the image above) represents the successive kingdoms of men that existed synonymously with the nation of Israel.

The legs of Iron represented the Roman Empire which eventually had an Eastern and Western component seen in the two legs. Daniel 2:42 describes the latter day component of the image, the feet, which also contain Iron and therefore the Roman element.

Revelation also draws on Daniel to give us more detail about this latter day entity – this is explained briefly here. Both prophecies require that the Roman Empire be re-formed in the latter days, around the time that Israel is re-established as a nation in their own land.

Bro. Thomas goes on to explain a little more about how his might begin to come to pass:

“The time is not far off, when the Latin Bishop (The Pope) may have to seek again to the Constantinopolitan Imperial Autocracy (Russia in Constantinople) for protection.”

While Russia is not yet in Constantinople (currently under the control of Turkey) it increasingly looks as though Russia and Turkey are about to have an armed conflict which could well see Russia taking the ancient city.

However it seems tht Constantinople or not, the Pope has already started to seek out the security that only Putin can offer, see the following article: Pope Francis Sees Putin as ‘Only Man’ to Defend Christians Around the World

Interestingly, a number of sources suggest that todays meeting was initiated by Putin himself. If this is true, it seems to be timed well with the Russian-Turkish crisis.

Today’s meeting will set the tone for further unification between East and West, between the two feet that will form the latter day representation of the Kingdom of Men.

And in the days of these kings shall the God of heaven set up a kingdom, which shall never be destroyed: and the kingdom shall not be left to other people, but it shall break in pieces and consume all these kingdoms, and it shall stand for ever.

- This is what could cause Russia to invade Israel

- The Symbol of a Nation of Fierce Countenance