A couple of weeks earlier, we reported that Russia had moved troops within 85 kilometres of Israels border and we thought this was close! Well in the last few days, Russian troops have now moved 5 Kilometres from Israels border where they plan to stay for the long term.

This news is confirmed by a number of mainstream media reports including STRATFOR intelligence who say that this move was a part of a loosely established ceasefire agreement between the US and Russia.

Its a monumental step from September 2015, when we watched Russia move into Syria and setup a military base in the North-West.

The troops are now stationed in the Syrian town of Quneitra opposite the Syrian-Israeli Golan border. Russian military personnel were already present there to advise Syrian Arab Army troops – however this is the first time the Russian military units have been deployed on this scale. 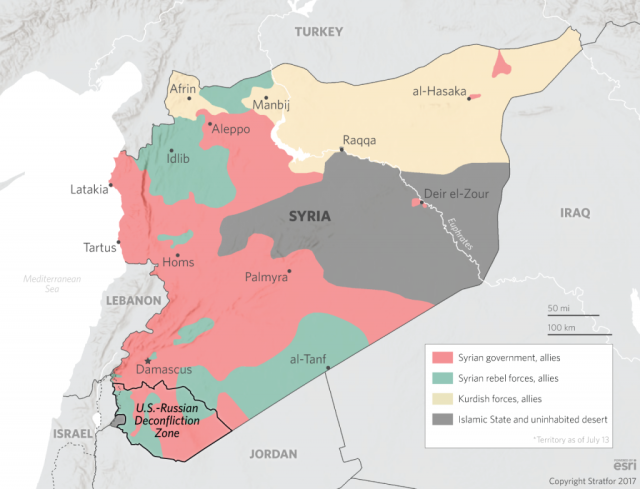 A senior Israeli official reacted with alarm, “The agreement as it is now is very bad. It doesn’t take almost any of Israel’s security interests and it creates a disturbing reality in southern Syria. The agreement doesn’t include a single explicit word about Iran, Hezbollah or the Shi’ite militias in Syria”.

The absence of any Trump-Putin commitment on this score leaves Israel fully exposed to the presence of Iranian and Hizballah forces within mortar range of its Golan border in an area supervised by their ally, the Russian military.

It was this danger that galvanized Prime Minister Binyamin Netanyahu into broadcasting Israel’s total opposition to the Trump-Putin ceasefire for southwestern Syria during his visit to Paris on Monday, July 17, after his talks with President Emmanuel Macron.

In an apparent bid to calm Israel’s concerns, Russian Foreign Minister Sergey Lavrov made an usual statement for a Russian diplomat: “I can guarantee that we have done everything and the US side has done everything to ensure that Israel’s security interests within this framework are fully taken into account,” he said later on Monday.

Careful perusal of this comment revealed to our sources that it was made in the context of a previous ceasefire accord for the Russians had made Turkey and Iran “co-sponsors.”

Note how Russia has the responsibility of managing Iranian, Turkish and Hezbollah presence along the Golan – these are the national belligerents of Armageddon (Ezek 38 & Joel 3).

“‘Get ready; be prepared, you and all the hordes gathered about you, and take command of them. After many days you will be called to arms. In future years you will invade a land that has recovered from war, whose people were gathered from many nations to the mountains of Israel, which had long been desolate. They had been brought out from the nations, and now all of them live in safety. You and all your troops and the many nations with you will go up, advancing like a storm; you will be like a cloud covering the land. Ezekiel 38

How much closer does Russia need to be to Israel for us to make changes in our life that should’ve been made some time ago? (I speak for myself as much as anyone else!).

How long until the next step South is taken?